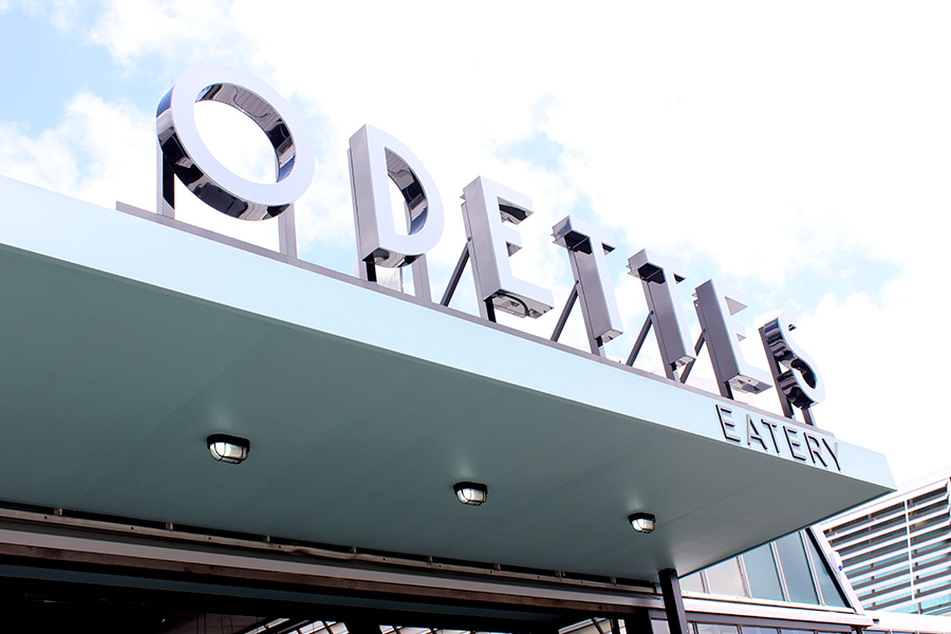 Odettes has been an eatery that has been on my 'to visit' list for a very long time! Set in the city works depot amongst other popular eateries such as Best Ugly Bagels (de-freaking-licious) and the Food Truck Garage, Odette's seemed to be a promising addition to the already well established setting.

For starters, I have to say the interior is absolutely beautiful; a mixture of teal and duck egg blues mixed with sterling silver and natural wood finishes, it wouldn't be over stated to say it is one of the prettiest, most visually appealing cafes I have eaten at in a long time. My friend and I decided to sit outside, which is equally as gorgeous as the interior (and why not enjoy the sunshine while it lasts, right?).

We were offered to sit where we pleased, and as we got there just on the brink of noon there were plenty of options. We chose a little table tucked under the shade, and were given lunch menus fairly promptly. Along with our menus came these gorgeous grey side plates, that hinted that this menu was for sharing. 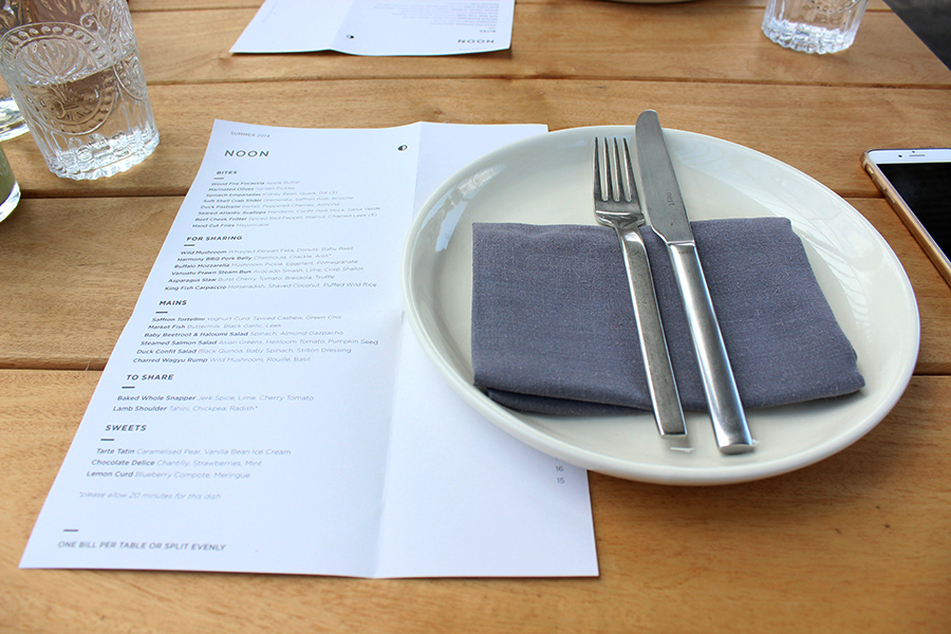 Courtney and I are avid foodies, and trained to be chefs together, so 99% of the time we are desperate to try as many parts of the menu as possible to get a feel for what is on offer. Broken down into bites, for sharing, mains, to share and sweets, there were a substantial amount of options within each section with a variety of styles.

We were unsure of how many to order, and the waiter suggested to us that 4 would be suffice for lunch, and may even leave room for a sneaky dessert to finish. After a few 'umms' and 'aaahs' we finally decided on what we were to be eating; beef cheek fritters, a soft shell crab slider to share, spinach empanadas and a Vanuatu prawn steam bun.

The food arrived within twenty minutes, and we immediately dived into the beef cheek fritters. Served with spiced red pepper, walnut and charred leeks ($14), this was the highlight of the four dishes. Resembling little beignets, these fritters were filled with perfectly cooked beef cheek, and crisp on the outside. The red pepper puree was a nice addition to cut through some of the richness, and didn't have an overwhelming flavour of capsicum, and the leeks were a nice vegetable addition; as for the walnuts, they didn't give much to the dish, but I didn't mind them being there either.

`Next were the spinach empanadas, with kidney bean, quark and dill ($12). I have cooked with quark before, in university we used it in a cheesecake recipe in replacement of cream cheese, but it is definitely not how I remember. To look at, it had a similar form to that of whipped egg whites, with the flavour being a slight reminder of sour cream and chive flavoured crackers as a child. Without the quark though, the dish overall would have been fairly bland. The empanadas were filled with a spinach and kidney bean mixture, which was tasty, but very close to having no immediate flavour at all; although I thought the empanada dough itself was delicious, slightly crisp and short in texture.

Then unfortunately, it wasn't the best from here on (excluding dessert, but we will get to that soon!). When we ordered the sliders and prawn bun, we were under the impression that they would be of a substantial size that you could cut in half and share between the two of us. Starting with the slider, it was fairly small, and a little underwhelming. It was my first experience trying crab, and the flavour was good, but close to luke warm and not very crisp for something that I assume had been deep fried. I wasn't able to detect any of the gremolata or aioli that was mentioned on the menu, just some pickled vegetables on a slightly dry slider *sadface. Then we moved onto the steamed prawn bun (I didn't take a picture, as it was swamped with some paper that didn't reveal much of the product). It was in the style similar to those that I have had at Bluebreeze Inn, where the steamed bun is more of a open sandwich that holds the filling. I hate saying bad things, but it really wasn't very appetising. The bun itself was cold, and there was once piece of soggy prawn that was no bigger than a 10 cent piece. The piece of prawn sat on a generous amount of avocado smash, only to realise after taking bite an extremely strange after taste that resembled very overripe avocado. I was so looking forward to the steam bun too! The final downside to these two dishes as well, was that I saw them as rather overpriced for what you received. I don't usually debate the pricing of food at eateries as I am aware of food costs, overheads etc but these two were undoubtedly overvalued.

Lastly, I have a major sweet tooth, so we decided to split the dessert of lemon curd, meringue and blueberries ($15). The lemon curd came in the form of a lemon mousse, served with a blueberry compote and a shard of meringue; simple yet flavoursome and refreshing for the beautiful summers day that it was. We left on a high note, but unfortunately it wasn't all that my high expectations wanted it to be. Although, I may have to come back once more for dinner, just to stare at the dreamy interior for a few minutes. 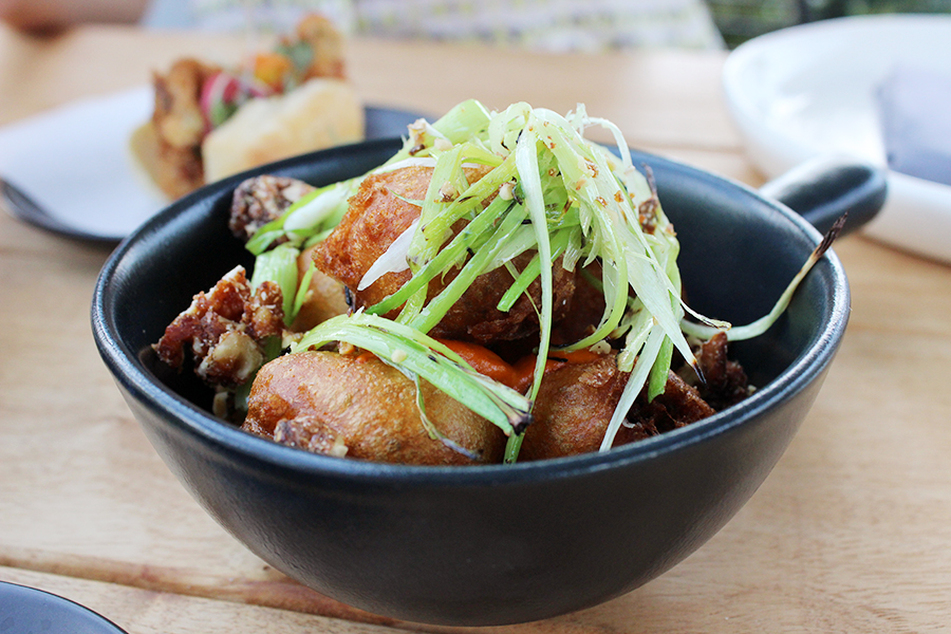 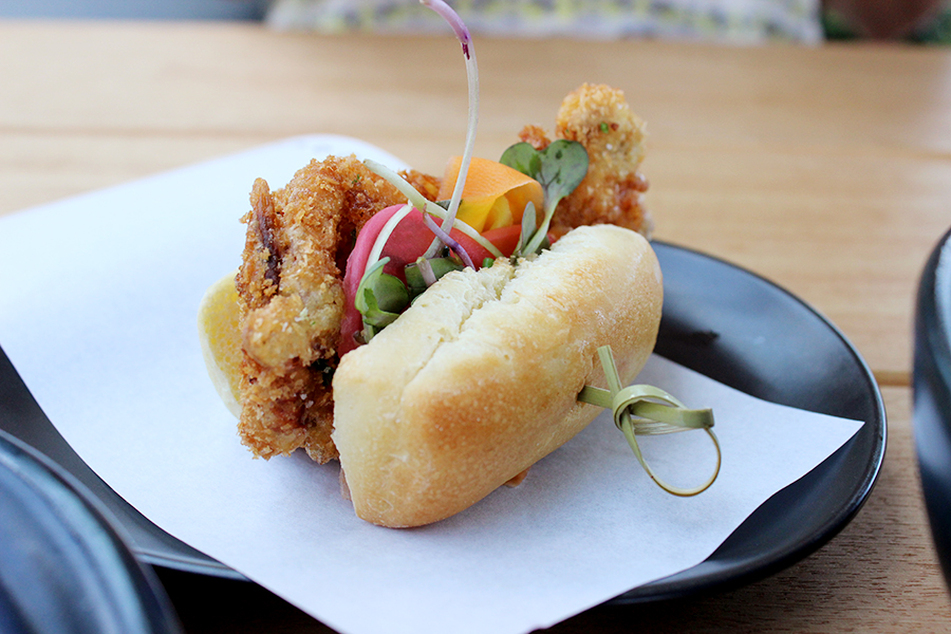 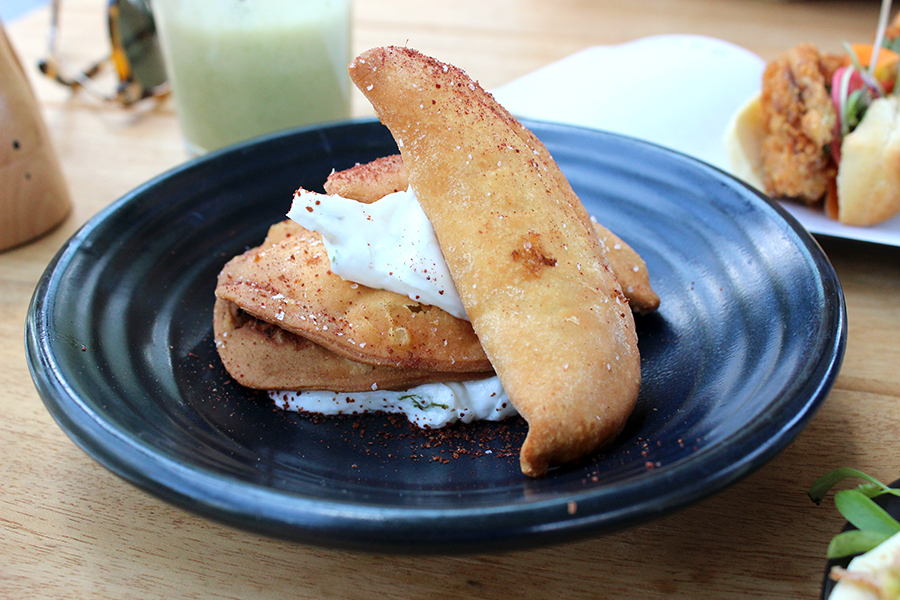