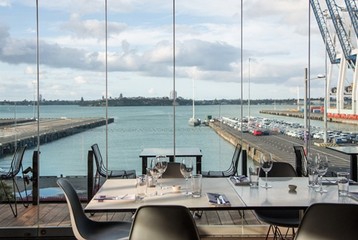 Ostro is the first installment of the Seafarer's building, and it sets the bar. Started by Josh Emett, New Zealand Masterchef judge, the buzz around this restaurant hasn't died down since the day it opened.
I had seen and heard so many great things about Ostro before I had the chance to go, and couldn't wait to try it for myself.

When I go to a restaurant I usually will only get two courses; main and dessert (because I have the BIGGEST sweet tooth ever). As soon as i saw the menu, my normal choices went out the window. There were so many yummy looking things to choose from, and man was it a struggle to decide. In the end, my sister and I decided we were going to share an entree and have our sneaky main and dessert too.

(Excuse the quality of the images in the next section, the lighting was so so so dim in the restaurant you couldn't really see a thing!)
*image above from britomart.org 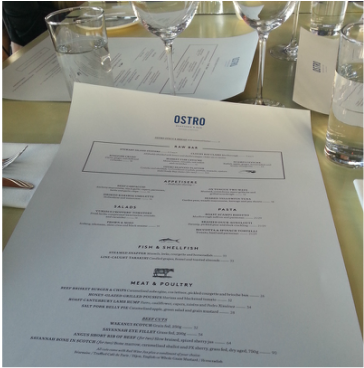 For the entree, we chose 'braised duck agnolotti with pickled pear, parsnip and duck crackling'. When we ordered we mentioned that we were wanting to share the dish, and from past experiences you would either share from the plate or be given extra plates. When the waiter bought the dish over, it was so nice to see that had beautifully plated a half portion with as much detail as they would with the full plate (I thought that the half portion was actually an ideal size for a starter!).  This was by far my favourite course! The pasta was so thin, and the filling inside literally melted away in your mouth, The parsnip puree beneath aided the plate as a sauce along with the jus, the richness cut by the thin slices of pickled pear. Last but not least was the duck crackling. If you love classic pork crackling found at a sunday roast, you would love this 1000x more! De-freakin-licious!

For my main I chose 'roast cantebury lamb rump, farro, cauliflower, capers, raisins and pedro ximénez'. I love lamb, and the combination of cauli and raisins sounded really interesting, so I had to choose it! The lamb rump was cooked perfectly, and I thought the portion was very generous! The flavours worked really well together, and the farro was amazing with the charred cauliflower. One of the only downfalls to this dish was the saltiness of the meat and the farro, it was a bit heavy handed but it's an easy mistake to make, other than that it was a really tasty dish.

The last course of the night was 'chocolate mousse, espresso, hazelnut doughnut and milk sorbet', one of eight choices on the dessert menu. I'm a sucker for chocolate desserts, and as soon as I saw doughnuts I was sold (typical me hahah). When the plate came to the table, I was most intrigued by the milk sorbet, only after devouring the doughnut of course; which was filled with a nutella type filling, which automatically meant I would loooooove it! The milk sorbet worked as a almost palette cleansing element amongst other very rich items, but it was almost a bit plain. The thing I was surprised by was the center of the mousse; a sweet but slightly bitter coffee mousse, which really helped break the sweetness in the chocolate.

The positives to my experience definitely outweighed the negatives, and I would happily go back again soon x