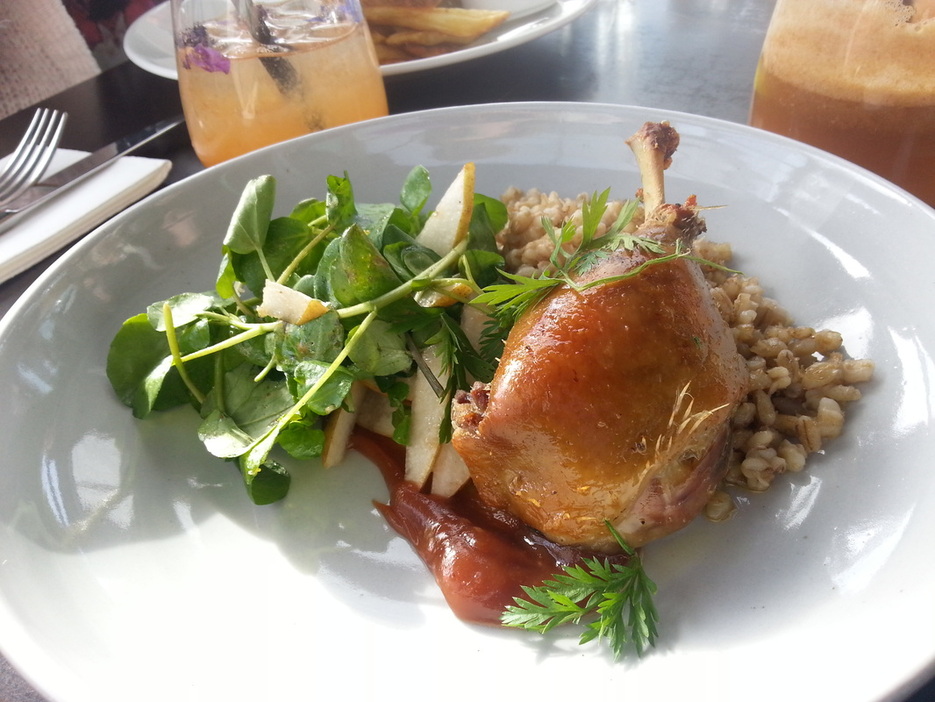 Confit duck, freekah, pear, watercress and butterscotch.
Provenance Matua Valley Eatery and Store is a new addition to the Hip Group, which opened in the late months of 2013. Owned by Scott Brown and Jackie Grant, who also run the largely successful Milse, Ortolana and Takapuna Beach Cafe and Store, Provenance took over the formerly known Bees Online in Waimauku, Auckland.

The space is large, offering both indoor and outdoor seating, with a majority of the outdoor seating sheltered by windbreakers; allowing diners to take in the sunlight, without the chilly breeze that has been creeping up on us. The decor is very soft and natural; modern wooden chairs and tables and heavily dependent on natural light, creating a nice flow between the inside and the out. Provenance focuses largely on organic produce grown on site, which is evident as soon as drive onto the property. Vegetable gardens lace the outer of the building, and the large open space is more than inviting.

We had made a booking as it was my birthday lunch, but there wouldn't have been a struggle for a table if we hadn't been so organised. After being seated, we were promptly given our menus and told about the specials, including the cocktail; an apple crumble cocktail, um yes please! A couple of my friends were driving and opted for the house made sodas, which were just as pretty and refreshing!

Between the six of us, we chose three different dishes. I personally went for the confit duck; I don't eat duck often, and who can turn down a beautiful confit duck leg?! My friends chose the pulled pork sandwich with hand cut chips, and the beetroot, kale and hazelnut gnocchi.

Both the duck and the gnocchi were plated beautifully, the quality of the produce was displayed on the plates and the colours played off each other in perfect unison. The sandwich on the other hand, was slightly underwhelming. I can't comment on the flavour within the dish as I didn't try it, but compared to the other two dishes, the sandwich just didn't live up to the standards set by the other plates.
The plate was basic; a bun, with some pork and an oversized piece of iceberg lettuce, and a handful of fries sitting next to it; sometimes it can be hard making a burger look pretty, but it definitely could have looked a lot better than it did.

Now to the duck, as soon as my plate was set in front of me, I couldn't wait to dig in. The flavours worked really well together; the richness of the duck and the savoury flavour of the freekah was cut by the sauce and the pear salad, and the watercress added a clean bitterness. There were two little issues with this dish, but neither were major negatives in the overall experience. The first was the feathers left on the skin of the duck; as a trained chef things like feathers don't bother me too much, but other diners may be a bit put off by this, but they were easily removed. The other nit picky thing was that the salad wasn't dressed, the smallest drizzle of olive oil and salt would have made all the difference to the eating of the dish. Overall, it was a beautiful, light, and perfectly sized lunch that left me content and not overly full.

For dessert, we ventured up to the enticing in house gelato parlour; flavours such as salted caramel, cherry sorbet, peanut butter chocolate and espresso were just a couple of the choices on offer. All of us chose salted caramel (it was amaaaazing!) and I chose to have mine in the form of a sundae. After my first spoonful I unwillingly started to regret my decision as I was so, so, so full, but it was delicious none the less. Layered with butterscotch and marshmallows, finished with a shard of chocolate bark, this sundae did not fail in the slightest.

Overall, my first experience at Provenance was good. The service was friendly and thorough, the eatery is beautiful and clean to look at, and the food was generally great. It is so nice to finally have a nice lunch eatery in West Auckland, and I will be back with friends for another long Sunday lunch x